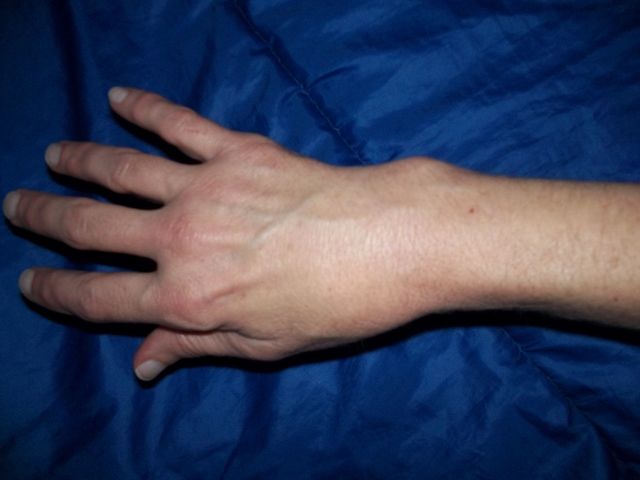 Just 5 weeks ago I fell off a ladder onto some concrete steps resulting in a cut over my eyebrow, bruised ribs and a compound fracture of my right wrist. From the beginning, my wrist looked terribly distorted, and I knew right away it was broken. I called Homeopathic Associates right after I sat up from the fall, and found out which acute remedies I needed. I got someone to make up those remedies and started taking them immediately. In fact, my 88 yr old Dad gave me a dose of Arnica 30C before I even got up off the ground!

I found out I had to have surgery to put in a plate in order for it to heal properly, but the surgery wasn’t scheduled for 10 days. I had a splint, but no cast. I took my homeopathic remedies faithfully every half hour at the first twinges of discomfort and I kept waiting for the “real” pain to start. I hardly had any pain whatsoever—before or after the surgery. I was prescribed heavy-duty pain medications (oxycodone and hydrocodone) by the urgent care doc and the surgeon, but did not take nor did I need any of them.

I kept taking all my homeopathic remedies those 10 days, and after the surgery started the homeopathic clearing remedies for the medications I had been given, plus I used a clearing remedy for the X-rays I received (which I used again after each X-ray). I wish I had been more knowledgeable and assertive about which medications for the surgery were not necessary so I could have refused them. I had side effects from several of them after surgery – drugs I learned later really weren’t necessary after all.

For example, a drug called Epinephrine or Adrenalin was added to the arm nerve block (Brachial plexus block) I found out later. I Googled it and found out they use it to reduce bleeding & tighten the tissue during surgery. After the surgery I started having intermittent heart palpitations and chest-aching symptoms that really worried me. But when the Epinephrine was cleared with the homeopathic antidote, those symptoms gradually stopped.

The Decadron or Dexamethasone (a “glucocorticosteroid”) they gave me as another adjunct drug is primarily used for Chemotherapy!! It caused the nerve block to give me numbness in areas for DAYS instead of just 12 hours like they said. I even had to be treated for tingling and numbness in my fingers as a side effect from the nerve block, which a few doses of Hypericum 30C worked great for.

Also, the first couple of nights I was afraid of possible throbbing pains that the nurses had drilled into my head that I was going to have. Even though I didn’t experience any, I took some Tylenol (Acetaminophen) as a preventative. Later when I cleared it using Tylenol 30C, I went from feeling fear and anticipation of getting the cast off and feeling like “it’s not ready”, to feeling relaxed, loose and like “it’s ready to come out of the cast! It was so weird! I actually felt good about my wrist being exposed and ready to do things. At the 2-week post-op appointment, the surgeon said my x-ray looked beautiful, even though right after the surgery he said it had been more complicated than he thought it would be!

Three weeks after the surgery I was driving again, and not wearing anything on my arm/wrist – no bandages whatsoever! I am exercising my wrist 3-4 times a day, and each day I can do more with my right hand (writing, cooking, opening doors and jar lids, etc.). I also used Mueller’s organic Arnica Oil topically for the swelling and her organic Calendula Ointment on the scar – which looks like it’s been healing for more than a month, not just a few weeks!

My recovery experience has been pain-free and positive, thanks to homeopathy and the Muellers. I know that in a few more weeks I will have regained full function of my hand and wrist.  And, at the age of 64, this very rapid healing cannot be taken for granted! I know that Homeopathic treatment is the key factor in my amazingly fast and complete healing.