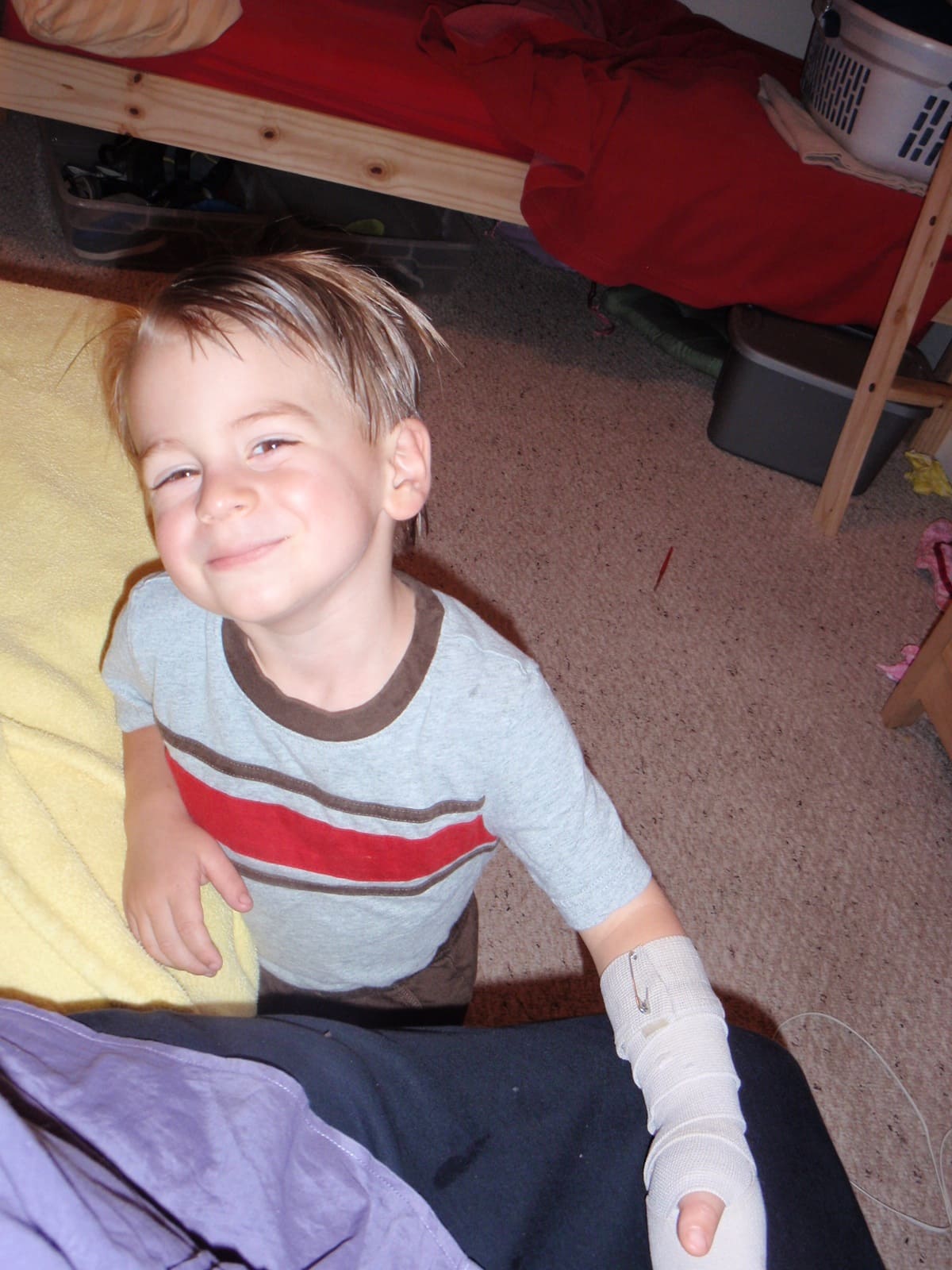 A few weeks ago, our 6-year old slammed the car door on our 2-1/2 year old son’s hand! OUCH! We were not at home but I always travel with remedies. I immediately gave him one dose of Hypericum perfoliatum 30C in liquid, reasoning that the hand is a nerve-rich area, etc. To my surprise, it didn’t help. To be fair, I waited and observed him a few minutes while he was crying in pain, then I gave him a dose of Arnica montana 30C in water: he calmed down instantly (so much for placebo effect!). I continued Arnica every 15 minutes until we got home an hour later and could assess the situation.

Upon examination, his hand was swollen, mostly localized on the top around the thumb and first finger. The greenish-purple discoloration indicated that some healing in the bruise was taking place. There was also pain on palpation. He could not bend his first finger and could barely move his thumb. He could move his wrist with little pain. My husband (a homeopath for over 30 years) and I decided not to go to the ER for X-rays- we’d just proceed as if it were broken. I know many folks in this situation would get X-rays, but given their extreme health effects (even one X-ray can cause cancer according to the research of the late Dr. John. W. Gofman), and due to the non-vital nature of our son’s injury, we decided to wait until the swelling went down and to re-assess.

By this time, he was feeling better, so we switched to hourly doses of Arnica and wrapped his hand to keep him from re-injuring it. After 10 doses, we went to a higher potency of Arnica (31C) to avoid aggravations – all standard procedures.

By the next day, we removed the bandage and examined the hand- no sign of swelling, only slight darkish discoloration on the top of the hand. There was pain localized to one spot on the top of the hand – on the bone that extends from the thumb. He had more movement in the first finger and thumb going to the wrist, although still limited. There was no sign of a fracture, but we were concerned that there could still be a hairline crack on the bone.

We couldn’t tell for sure whether we were dealing with a crack or just a bone bruise- either way, these symptoms pointed to Symphytum officinalis (comfrey, knit bone)! We chose a Q(LM) potency and gave a split dose in water, 3 times per day for the next three days. We made a makeshift splint using a sock, a self-sticking bandage, a flat piece of wood that my husband cut to mimic the shape of his arm & hand going just to his fingers, and a sense of humor! The children watched in fascination.

I palpated the hand several times a day and after the first 2 doses of Symphytum, I’m happy to report that the pain on top of the hand had significantly reduced! I almost couldn’t find a sore spot! To me this indicated that we were dealing with a bone bruise and not a break. My husband concurred. To be prudent, we continued the cast and the Symphytum for a few more days, using a higher potency after 10 doses. After 6 days, he had full movement of his finger and thumb with absolutely no pain or swelling so we removed the very stinky cast (little boys are just not going to keep their cast out of water!) and, voilà, a new boy!