Municipalities add fluoride to public water systems in the United States at the rate of 1 to 3 ppm (parts per million) – purportedly as a means to prevent tooth decay. This has produced serious environmental diseases including genetic mutations that are passed on to the offspring of those affected.

Fluoride is a by-product of the aluminum and phosphate fertilizer industries and a potent poison. When scientists raised concerns about the dumping of fluoride into rivers and lakes, the industry proposed the following solution: adding the substance in controlled amounts to drinking water, defending it to the public as a “safe” and effective preventive measure for tooth decay. However, fluoride is more poisonous than lead and only slightly less poisonous than arsenic. Prior to fluoridation in water, fluoride was used as a rat poison. One single tube of commercial toothpaste contains enough fluoride to kill a child.

John Yiamouyiannis, Ph.D., author of “Fluoride: The Aging Factor” (1993) and an internationally recognized expert on the biological effects of fluoride, estimates that by 1993, fluoridated drinking water was responsible for the chronic poisoning of over 130 Million Americans. He approximates that about 40 Million Americans suffer from fluoride-induced arthritis, about 8 Million children in the US have developed fluoride allergies, and about 35, 000 Americans die from fluoride poisoning each year.

According to a study conducted by Yiamouyiannis, and Dean Burk, Ph. D., a chemist from the National Cancer Institute, about 10,000 Americans die each year from fluoride induced cancer. But cancer is not the only danger from fluoride. William Murphy, MD, Nobel Prize winner, in Medicine, writes, “dental fluorosis (mottling) may result (from fluoridation of drinking water). In hypersensitive individuals, fluorides occasionally cause skin eruptions such as atopic dermatitis, eczema, or urticaria (hives). Gastric distress, headache and weakness have been reported.”

According to a pamphlet published by Yiamouyiannis, fluoride causes visible symptoms in people who are poisoned by the substance. Nearly 35% of people who grow up in areas where fluoride has been added to the drinking water have visible dental abnormalities, resulting from disturbed tooth development. Dental fluorosis, or mottling, appears as chalky-white areas on the tooth, gradually turning yellowish and in severe cases, turning brown and even black. The teeth become brittle, and the tip breaks off. Some studies show that poorly nourished children show dental fluorosis even when they drink water with only a .4-PPM fluoride concentration.

The 1992 Canadian Dental Association Proposed Guidelines stated: “Fluoride damages teeth by interfering with the proper formation of collagen-like proteins in the tooth during the tooth’s formative stages. These proteins also comprise the structural component for skin, ligaments, muscles, cartilage and bone. Fluoridated water leads to a prematurely wrinkled skin, arthritis, torn ligaments and tendons. Fluoride ingested in a concentration of less than 1 PPM can cause osteoporosis. As little as .7-PPM concentration of fluoride in the water can produce skeletal or osteofluorosis.

Several studies published by the journal of the American Medical Association have found that fluorides produces bone damage. According to these studies, hip fractures are more common in fluoridated areas. An article in the March 22, 1990 New England Journal of Medicine reported that fluoride treatment of osteoporosis caused bone fractures.

Though several studies have been cited to refute the Burk-Yiamouyannis study that found 10,000 cancer deaths each year, after adjusting for errors and omissions. The National Cancer institute, the Safe Water Foundation, and the New Jersey Department of Health, both found that the incidence of osteosarcomas in men living in areas of fluoridated water was higher than those who were not exposed.

A recent report points to the fact that the above studies were conducted with pure (pharmaceutical grade) fluoride. However, the fluoride added to our drinking water is derived from phosphate mines in central Florida. Phosphates, a major raw material used by the fertilizer industry, are found there along with fluorosilicates and radioactive uranium. Due to their proximity, fluorosilicates are radioactive. Municipalities add these radioactive fluorosilicates to the drinking water. This means that the real cancer rate and genetic damage due to fluoridation may actually be much higher than the studies suggest.

The toxic effects of fluoride have been known for over 150 years, when homeopathic physicians tested the poison on healthy volunteers in small amounts (in a process called “proving”) to see what therapeutic benefit could be derived from the substance. They found that 3-PPM fluoride (about the concentration of fluoridated drinking water) caused “feelings of indifference towards one’s family and loved ones, an inability to realize responsibilities and a sense of mental buoyancy.” Would the dramatic increase in family problems be related to fluoridated drinking water?

In addition to the psychological symptoms caused by fluoride, numerous neurological symptoms were noted, that read like a clinical description of attention deficit and hyperactivity disorder. The poison affects almost every organ of the body as well. Was the fluoride added deliberately to make people sick? One wonders who could benefit from the widespread poisoning of the population. The profits of the cancer industry, the pharmaceutical industry and the dental profession have sky rocketed since the addition of fluoride. 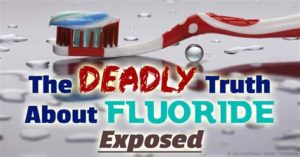 Hollywood has been mocking fluoridation of water supplies for years. As early as the nineteen-seventies, in the movie Dr. Strangelove, a military general who is preparing for a nuclear war tries to convince one of the officers on his base, played by Peter Sellers, that fluoridation of drinking water is “the most hideous Communist conspiracy ever conceived.” In the movie, Gross Point Blank, a professional killer, portrayed by Dan Akroyd, brags that the “mental enhancer” drug he pops daily “will soon be added to the drinking water, like fluoride.” In the introduction to the movie Conspiracy Theory, the character played by Mel Gibson launches a tirade about the fluoridation of water purportedly breaking “the will” of the population. If the above-mentioned studies are correct, the latter warning may not be so far from the truth.

Whether or not fluoridation represents a conspiracy, the serious health problems resulting from the poison are real. To avoid those problems, it is necessary to stay away from commercial (including some “natural”) toothpastes that contain fluoride. There are several alternative toothpastes on the market, available in health food stores. For those who have fluoridated city water, a whole house filter can be installed, which removes most contaminants including fluoride, and might make the water safe for washing dishes and doing laundry. All drinking water should be tested for chemical contaminants, including radioactive particles. It is best to avoid all fluoridated water. For bathing, drinking and cooking, good spring water from a protected watershed is till the best solution.

Once exposure to fluoride has been eliminated, a homeopathic potency of the substance may remove the disorders caused by the poison. This method is known as tautopathic treatment. It makes use of the hormesis effect, the observation that a minute dose of a toxic substance can protect against a toxic dose of the poison. Along with specific homeopathic treatment the body can slowly restore its health and begin its recovery from chronic poisoning.