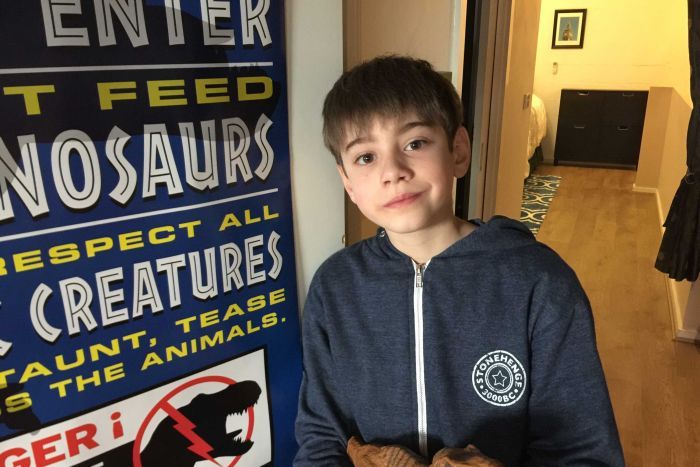 Parents are calling for new warning labels on a common asthma tablet that has been linked to cases of suicidal thoughts and depression in children as young as four.

The drug, called Montelukast or Singulair, is prescribed for children aged two to 14 with frequent intermittent, mild persistent or exercise-induced asthma.

Melanie (who does not want her surname used) said her six-year-old son Harrison suffered what his doctors called “a psychotic breakdown” after being on Singulair.

“He would say I want to go to Heaven and I don’t want to be here anymore,” she said.

“I was incredibly shocked when I realised that a little chewable tablet to control his asthma symptoms could possibly be linked to such severe psychological symptoms.”

The drug is used by thousands of Australian children with asthma.

But figures obtained by the ABC show between January 2000 and March 2016, the Therapeutic Goods Administration (TGA) received almost 90 reports of psychiatric events in children and adolescents treated with the medication.

Vanessa Sellick’s son, also named Harrison, had been taking the drug since he was two years old.

She said it changed his behaviour and the problems became worse as he got older.

“Harrison was four years old when he started making comments about wanting to die, wishing that he was dead, that he was a piece of garbage – he had terrible self-loathing,” Ms Sellick said.

His doctors believe he suffered a reaction to the medication.

One day he acted on his suicidal thoughts.

“It was just devastating at the time,” Ms Sellick said.

“There’s no doubt in my mind that he actually wanted to end it, he wanted to end the pain. I think he was just a little boy in terrible emotional stress.”

Paediatric respiratory physician Adam Jaffe from Sydney Children’s Hospital said there was no way of knowing which children might suffer a reaction to the medication.

He has taken some of his own patients off the drug because they experienced serious side effects.

“Some of my patients complained of nightmares, tantrums, being angry or sad, and the challenge for me and the parents is to figure out whether it’s the medication or the child’s behaviour,” he said.

He stressed the majority of patients could take it safely but said some children would suffer the psychiatric side effects.

“Obviously it’s devastating if you are that one child and that family, so it’s very important to highlight that and certainly that’s my practice,” he said.

Professor Jaffe said he suspected some Australian doctors had become complacent about the risks of the drug and needed to be reminded.

US authorities take action after death

American health authorities have been investigating the safety of Montelukast since 2008.

After Cody Miller, 15, took his life after taking the drug for just 17 days, the US Food and Drug Administration (FDA) required manufacturers to put warnings about psychiatric side effects in medical information.

In April 2013, Australia’s Therapeutic Goods Administration (TGA) published a Medicine Safety Update article on Montelukast to alert health professionals to the risks and the need to warn patients and carers.

But both mothers Vanessa Sellick and Melanie said they were not given any warnings by their doctors.

“We were very, very surprised to hear that there was research out there to say that Singulair could cause such severe psychological disturbances,” Melanie said.

Vanessa Sellick added: “The doctor felt that there were no side effects with Singulair and it would be a safer option for us to use.”

They said parents should not take their children off the drug before consulting their doctor and acknowledged it could be very effective for some asthmatics.

However, they want clear warning labels put on boxes of Montelukast so other parents are aware what they might be getting into if their children take the medication.

The company behind Singulair, Merck, Sharp and Dohme, told the ABC the drug has been used safely by tens of millions of people around the world.

“Consumer medicine information is made available to patients via the TGA website or the MSD website,” it said.

The company spokesman said pharmacists had a “duty of care to offer and provide consumer medication information to patients”.

Australian health authorities said prescription medicines did not generally have warning statements on the box or cartons because warnings were detailed in the product information.

“There is an expectation that the prescriber explains the risks and benefits to the patient,” a TGA spokesperson said.

But after being alerted to parents’ concerns by the ABC, the TGA is considering publishing a reminder about about the issue on its website and ensuring the information is widely distributed to health professionals.

“We continue to monitor this class of medicine, as well as international regulatory activities, to see if updates are needed,” the spokesman said.

The Asthma Council said patients should not stop taking their medication without consulting their doctor.