AJ and the Accident 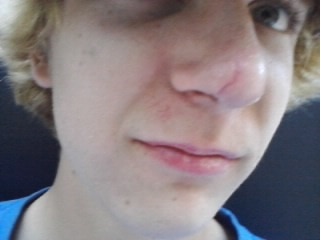 Late in August we encountered a family emergency.

I used my knowledge of homeopathy to treat my 17 year old son, the victim.

His healing has been so complete in such a short amount of time, that it is difficult to comprehend without looking at these before and after pictures.  I want  to share these amazing results with you.

My son AJ, was busy in the backyard driveway restoring his “dream car”, a black 1965 Ford Mustang, when a sharp metal blade  from a power tool he was using snapped in half, violently blazing a bloody trail across his face.  It grazed his upper lip, sliced through his left nostril, while racing across his safety glasses with enough force to knock them from his face.

Next, the blade punctured his left forehead, leaving a small but deep wound.

According to our children, he bled so much the driveway surrounding the car looked like a gallon sized can

of tomato  sauce had spilled on the concrete.  Shortly after, when my husband and I arrived home, the driveway had been sprayed clean, and only a blood soaked t-shirt used to apply pressure to the wounds, remained on the scene.

AJ, after rinsing in the shower, taped his nose back together, and then commented how easy it was to breath immediately after the accident.  I believe it was because he sliced his nostril completely open.  However it was difficult to tell for certain, because of all the blood.

I refused to look at the wounds, but I had to think fast.  Using my homeopathic remedy kit, I grabbed 4 remedies, as I sent AJ to fetch his own bandages from the closet.

1)     I soaked the bandages in diluted Calendula tincture– to prevent infection and to speed healing.

2)     Next, I prepared Arnica montana 30C to combat internal infection and bruising.

3)     Then, I alternated with Hypericum perfoliatum 30C , in case of any nerve damage.

4)     Lastly, I administered Aconitum napellus 30C to both AJ and his sister, to treat the emotional shock from trauma.

I administered the remedies that night, and fed him green smoothies and grass-fed hamburgers to help his body replenish the blood he had lost.  He seemed fine mentally , but we kept him under guard through the night until we could call Homeopathic Associates the next morning.

After a few days, we completely removed the bandages – then, several times a day for the next two weeks, he applied Calendula solution externally to his nose and forehead.  The wounds seemed to heal about a ¼ inch each day.  The only challenging part of the whole ordeal was keeping an active teenager still for two weeks, so that the wounds could heal without risk of splitting open.