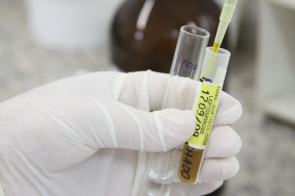 Leptospirosis is a zoonotic disease of major importance in the tropics where the incidence peaks in rainy seasons. Natural disasters represent a big challenge to Leptospirosis prevention strategies especially in endemic regions. Vaccination is an effective option but of reduced effectiveness in emergency situations. Homeoprophylactic interventions might help to control epidemics by using highly-diluted pathogens to induce protection in a short time scale. We report the results of a very large-scale homeoprophylaxis (HP) intervention against Leptospirosis in a dangerous epidemic situation in three provinces of Cuba in 2007.

Forecast models were used to estimate possible trends of disease incidence. A homeoprophylactic formulation was prepared from dilutions of four circulating strains of Leptospirosis. This formulation was administered orally to 2.3 million persons at high risk in an epidemic in a region affected by natural disasters. The data from surveillance were used to measure the impact of the intervention by comparing with historical trends and non-intervention regions.

The homeoprophylactic approach was associated with a large reduction of disease incidence and control of the epidemic. The results suggest the use of HP as a feasible tool for epidemic control, further research is warranted. Homeopathy (2010) 99, 156e166.

200C potency of bacteria for Leptospirosis epidemic control in cuba