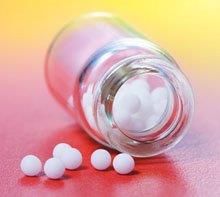 Homeopathy is commonly used for the treatment of medical and psychological conditions. Such prevalent use, however, is not supported by robust, methodologically sound research. This study evaluates the effect of homeopathic treatment in generalized anxiety disorder, a prevalent mental disorder characterized by an enduring pattern of excessive apprehension and distress and by mental and bodily complaints.

Forty-four patients with DSM-IV generalized anxiety disorder participated in a randomized, double-blind, placebo-controlled 10-week trial of individually tailored homeopathic remedy. Homeopathic therapy was administered by an expert who followed the traditional routines of homeopathic diagnosis and prescription. Thirty-nine subjects completed the study (20 in the active treatment group and 19 in the placebo group). Subjects’ symptoms were rated before treatment and after 5 and 10 weeks of treatment, with the Hamilton Rating Scale for Anxiety (HAM-A) as main outcome measure. Additional measures of outcome included the Brief Symptom Inventory, the Psychological General Well-Being Index, the Hamilton Rating Scale for Depression, the Beck Depression Inventory, Spielberger’s State-Trait Anxiety Inventory, and a Visual Analogue Scale of subjective distress.

Significant (p <.05) improvement in most measures, including the HAM-A, was observed in both the active treatment and placebo groups, yet no group effect was observed.

The effect of homeopathic treatment on mental symptoms of patients with generalized anxiety disorder did not differ from that of placebo. The improvement in both conditions was substantial. Improvement of such magnitude may account for the current belief in the efficacy of homeopathy and the current increase in the use of this practice.