The Treatment of Acne with Homeopathic Remedies 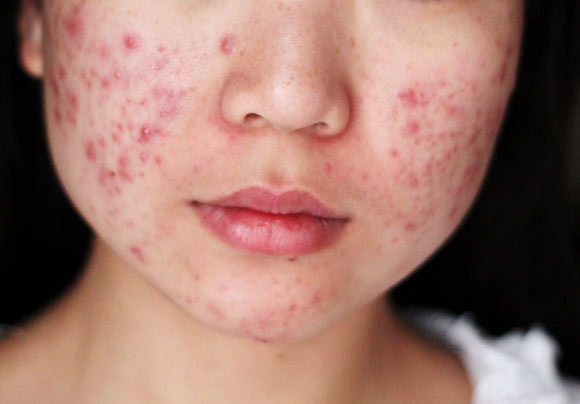 Acne. Suffer with Conventional Drugs? Or Cure with Homeopathy?

Acne (acne rosacea, acne vulgaris, cystic acne, nodulocystic, acne conglobata, scarring, blackheads, whiteheads, papules, comedones, pustules, Acne mechanica/sports induced acne, nodules, zits, pimples)  is an inflammatory skin condition that causes spots to develop on the skin, usually on the face, back and chest. It has been estimated that it can affect 80% of young people between the age of 12 and 24. For teenagers it can cause considerable distress and loss of confidence. The spots vary from surface blackheads and whiteheads to deep, inflamed, pus-filled pustules and cysts, which can be severe, long-lasting, and even leave permanent facial scarring.

Conventional treatment for acne can prove to be very long-term, and ultimately unsuccessful. If the condition is mild a variety of topical gels and creams, usually containing the chemical benzoyl peroxide, are usually recommended.
Benzoyl peroxide can irritate the skin, and made it more sensitive to sunlight. NHS Choices also says that it should be used sparingly, and can have a bleaching effect, “so avoid getting it on your hair or clothes”. The common side effects mentioned a dry and tense skin, a burning, itching or stinging sensation, some redness and peeling of the skin
Otherwise, conventional medical advice is to keep the skin clean, and for women, to avoid make-up and cosmetics.
When the condition becomes longer-term, or more serious papules and pustules begin to appear, a number of different treatments are used. NHS Choices says that the first treatment is usually a combination of antibiotic tablets, and topical treatments.
Topical retinoids such as Tretinoin and Adapalene are used in gel or cream form, but the advice is to use these ‘sparingly’, to avoid ‘excessive expose to sunlight’, and they are not recommended in pregnancy as they cause birth defects. BHS Choices says that the most common side effects are irritation and stinging
Topical antibiotics are used to kill the bacteria on the skin, and after a time the treatment is stopped “as there is a risk that the bacteria on your face could become resistant to the antibiotics; which can “make your acne worse and cause additional infections”. The common side effects mentioned are, irritation of the skin, redness and burning of the skin, and peeling of the skin
Azelaic acid is used “if the side effects of benzoyl peroxide or topical retinoids are particularly irritating or painful”. It can make the skin sensitive to sunlight, and the common side effects mentioned include burning or stinging skin, itchiness, dry skin and redness of the skin
Antibiotic tablets are used to treat more severe acne. Tetracycline antibiotics are used although they are not safe for pregnant or breastfeeding women who are give erythromycin antibiotics instead. The treatment can last as long as 4 to 6 months. The side effects mentioned by NHS Choices are skin sensitivity to sunlight, and making the oral contraceptive less effective.
Hormonal therapies are recommended for women who suffer from acne during the time of menstruation. This includes the combined oral contraceptive pill, although NHS Choices warn that the progestogen-only pill, or contraceptive implant can sometimes make acne worse.
Co-cyprindiol is described by NHS Choices as a hormonal treatment that can be used for more severe acne that doesn’t respond to antibiotics. NHS Choices describes “a small risk that women taking co-cyprindiol may develop breast cancer in later life”. Also, it says that “there is also a very small chance of co-cyprindiol causing a blood clot”. And again, this drug “is not thought to be safe ….. if you are pregnant or breastfeeding”. Other side effects mentioned are bleeding and spotting between your periods, headaches, sore breasts, mood changes, loss of interest in sex, weight gain or weight loss
Isotretinoin (better known as Accutane, or Roaccutane) is also recommended, but NHS Choices states that it can also “cause a wide range of side effects” so it is “only recommended for severe cases of acne that have not responded to other treatments”. Indeed, the side effects are so serious it can only be prescribed by a specially trained GP, or a dermatologist. These side effects include
• inflammation, dryness and cracking of the skin, lips and nostrils
• changes in your blood sugar levels
• inflammation of your eyelids (blepharitis)
• inflammation and irritation of your eyes (conjunctivitis)
• blood in your urine
• inflammation of the liver (hepatitis)
• inflammation of the pancreas (pancreatitis)
• kidney disease
NHS Choices also says that Isotretinoin will damage an unborn baby by causing birth defects, and that it is not suitable for women who are breastfeeding. It is also thought (but not admitted by NHS Choices) that it can cause mood changes, such as depression, anxiety, aggression and suicidal thoughts.

The information on this webpage represents the views and opinion of the author, based on his clinical experience, and the traditions of Homeopathy. This material is provided for information only, and should not be construed as medical advice or instruction. Always consult with a suitably qualified and registered Homeopath, or with a medical doctor for advice about the treatment they offer, especially in serious or life threatening medical conditions, or if you are already taking medical drugs.

The Homeopathic Treatment of Acne

The Treatment of Scar Tissue after Acne

Thiosinaminum
This is not a remedy for acne, but in low potency it is known to be an effective remedy for repairing scar tissue that may result from acne.

Thanks Steve for a great article!